Accounting for the characteristics of each prison’s population gives a more accurate indication of the effectiveness of each facility. Prisons were ranked by the proportion of prisoners released in 2009/10 with high-risk factors for recidivism. This ‘risk index’ was then compared against the recidivism rate ranking of each prison. This revealed which prisons were performing at, above or below expectations based on their prisoner cohort. 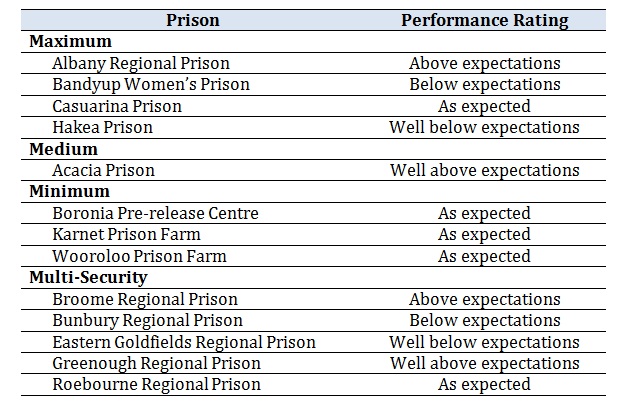 Acacia Prison and Greenough Regional Prison performed well above expectations. These prisons had a very high-risk prisoner cohort yet achieved recidivism rates that were close to the state average. These findings were consistent with inspections conducted around the 2009/10 period, which had concluded that both of these prisons were operating well. Acacia was considered one of the highest performing prisons in the state, and Greenough was described as a well performing, ‘quiet achiever’.

Conversely, Eastern Goldfields Regional Prison and Hakea Prison performed well below expectations. While these prisons had very different prisoner profiles, their recidivism rates were higher than what would be expected based on the characteristics of prisoners released. Again this is consistent with inspection findings. In 2009, overcrowding across the state resulted in sentenced prisoners being unable to transfer out of Hakea Prison, placing a strain on education, employment, and treatment programs within the facility and limiting access for prisoners. Similarly, Eastern Goldfields Regional Prison was described as neglected, with limited services available.

The key conclusion, then, is that prisoners are more likely to reoffend when they are released from prisons that have identified deficiencies in service provision.