Since 2008 only 70 people have escaped from corrective services in Western Australia while a further 38 have attempted to escape.

Recently, there have been a number of high profile escapes, with 12 prisoners escaping custody in the eight months between 1 January and 31 August 2014. One of these people remains at large. However, in spite of these recent escapes, figures have been relatively stable since 2008. The 70 escapes between 2008 and mid 2014 equate to ten escapes per year.

Prior to 2008 escapes were far more frequent. There were a total of 417 escapes between January 2000 and December 2007; an average of 52 escapes every year. There were also a substantial number of attempted escapes (67) during that time, but fewer unlawful releases (6). 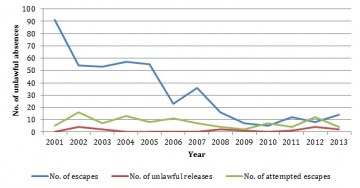 The number of unlawful absences from WA corrective services since 2001

Escapes and attempted escapes from corrections in Western Australia