Although the wording of the Policy Directive has not changed, the ACCO notice of October 2012 which rescinded the distance criterion also tightened the criterion around significance of relationship. In another shift of major importance, it removed the recognition of kinship and cultural relationships in considering funeral applications. Recognition of kinship and cultural relationships can now only be approved by exception, with the decision falling to the Assistant Commissioner Custodial Services.
Generally, then, only direct immediate family members to the deceased will now be approved to attend. This includes a prisoner’s biological/legal mother, father, sister, brother, son, daughter, grandparents or current husband, wife or de facto partner. It does not include grandchildren, nephews, nieces, cousins, uncles, aunts, great grandparents, in-laws or other extended family.
Consequently, the rules that have been applied since October 2012 again disproportionately affect Aboriginal people. In August 2012, 37 people were approved to attend funerals, 25 of whom were Aboriginal. Using the tighter criteria, 62 per cent of those who attended would have been denied, most of whom were Aboriginal (87%). Almost two thirds (64%) of those that did meet the tighter criteria were non Aboriginal.

Figure:  Number of people who were approved to attend a funeral in August 2012 measured against the tighter selection criteria 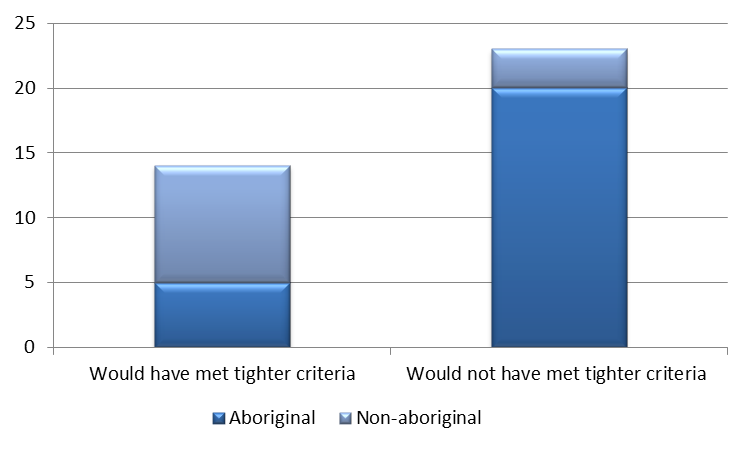 Notably, of the 25 Aboriginal people who were approved to attend funerals in August 2012, only 5 would still have been able to attend based on the tightened criteria.
The Department could not provide any analysis of the implications of tightening this criterion and it appears that none was undertaken. Again, this failure to carry out impact assessments breaches the Department’s obligations with respect to substantive equality.

Previous: Changes to the policy governing funeral attendance in September 2012
Next: Security assessments undertaken to attend a funeral