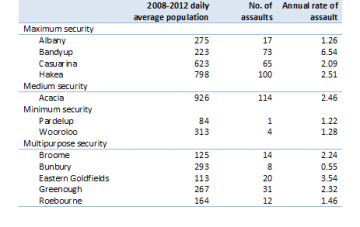 Table: Number and rate of staff assaults by custodial facility

Assault rates at minimum security facilities are appropriately low. There are four ‘pure’ minimum security prisons in Western Australia; Karnet, Pardelup and Wooroloo prison farms and Boronia Pre-release Centre for Women. Prisoners placed at these facilities require a low level of supervision and control within the prison and they can be reasonably trusted in open conditions. Only one assault was recorded at Pardelup (October 2010) and Wooroloo recorded just one assault each year except in 2011. No staff assaults were recorded at either Karnet or Boronia.

Four prisons – Albany, Bandyup, Hakea and Casuarina – are classified as maximum security facilities due to their design, philosophy and operational procedures. Together they accounted for 56 per cent of staff assault incidents (255). Prisoners held in these facilities can have various security ratings. Out of the 255 prisoners who assaulted staff in maximum security prisons, 100 were maximum security, 134 medium and 5 minimum. Another 16 did not have classifications.

The rate of staff assault at Bandyup Women’s Prison was by far the highest in the state. It was two and half to three times higher than the rate at the two large male maximum security facilities, Hakea and Casuarina. Alarmingly, by the end of 2013 Bandyup Women’s Prison had amassed 40 assaults for the year, more than double the number of assaults in 2012. This was vastly higher than any other facility with Hakea recording the next highest count (22) followed by Acacia (20). 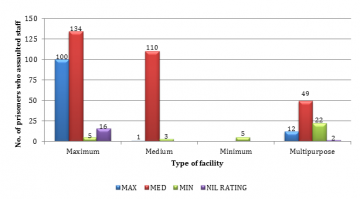 There are sometimes legitimate reasons why prisoners are placed in facilities where the security rating is higher than their own. This might be to maintain familial contact and visiting arrangements, or to undertake programs not offered at other prisons. However, there are occasions when people are accommodated in a facility with a higher security rating than their own simply because there is insufficient room in the system to accommodate people in an appropriate facility.

The 2012 review concluded that the Department should reduce the number of prisoners subjected to levels of security that are unnecessary given their security ratings. The correlation between housing people in over-secure facilities and the rate of staff assault gives added weight to this conclusion. In 2012 the Department committed to action but the situation continues to be of concern.