Women prisoners are very highly over-represented in staff assaults. The number of women in prison has been increasing rapidly over recent years and they now constitute 9.2 per cent of the state’s prison population compared with 7.5 per cent in 2008. For the period 2008-2012, women were responsible for 18.1 per cent of all assaults, well over double their overall representation. 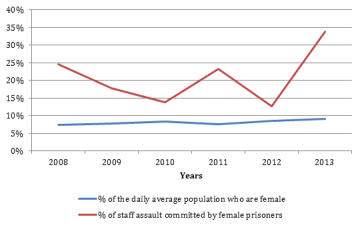 These figures are very troubling and the reasons are complex. They certainly include unmet mental health needs as well as crowding and poor conditions and restricted services at the state’s main female prison, Bandyup. Few assaults were committed by women at other prisons and Bandyup has by far the highest rate of staff assaults in the state.