Overcrowding is often linked to staff assaults in prisons. There is no doubt that crowded conditions contribute to the stresses of imprisonment: they not only reduce a prisoner’s level of privacy but also reduce access to positive activities to keep prisoners busy, such as employment, and create additional pressures on services such as health, mental health and counselling. These are all risk factors, and crowded conditions create stresses for staff as well as prisoners. However, although the highest rates of assault are at the most crowded prison, Bandyup Women’s Prison, there is no simple direct link to overcrowding alone.

National figures measure overcrowding by the extent to which actual occupancy levels outstrip design capacity. ‘Design capacity’ is described by the Department as the total number of permanent beds. It includes single occupancy cells and approved double occupancy cells. It does not include temporary double bunking, non-standard beds like those in segregation, observation, medical beds, beds in decommissioned units or wings, or cells which are out of order for maintenance or refurbishment.

The Department also uses the term ‘total capacity’. This is defined as the total number of beds including design capacity and temporary beds. Therefore it includes doubled-up cells which are not approved for long-term double occupancy.

A third term used by the Department is ‘operational capacity’. This includes infrastructure capacity, both temporary and permanent, but also incorporates a consideration of staffing levels.

Assaults and levels of overcrowding

Bandyup Women’s Prison, which had the highest rate of staff assault, is also the most crowded prison in the state. Its design capacity is 183 prisoners but according to the Department it had a ‘total capacity’ of 260 and an operational capacity of 259 during 2012 and 2013.

In 2012, Bandyup was operating above its operational capacity from April onwards. On four occasions its population reached more than ten per cent above operational capacity and for the year as a whole it operated at more than five per cent above capacity. However the rate of assault at Bandyup in 2012 was 5.12 per 100 prisoners, the second lowest rate over the five year period. 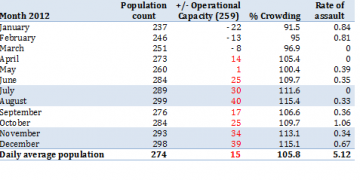 Table: Population count at Bandyup Women’s Prison on 15th day of each month 2012

A mixed picture emerges in 2011 where the rate of staff assault at Eastern Goldfields was again high and the population size was higher but still the second lowest for the five year period. This mixed picture is also apparent at Acacia, Casuarina and Hakea prisons